After seeing a prompt the other day on Drink Tea Write Words, I thought I’d give it a go: ‘Write about the things hiding in your protagonist’s bedroom’. I love this idea. From the obvious to the not so obvious.

Katie Button has been described as fun, kooky and passionate by gorgeous readers. She’s a tad scatty too which should make for an interesting nose round Katie’s bedroom. What is she actually hiding in there? If you’ve read The Adventures of Katie Button, you’ll be familiar with some of what’s hiding in her bedroom. But there’s a few you may be surprised at.


Shoe and boot boxes
Katie adores boots and shoes of any style and colour. Whether in the sale or full price (price  doesn’t figure if she really wants them) Katie will buy without a second thought. There are no little voices  in her head reminding her of bills to pay. No little voices telling her that she already owns that style; in another colour, yes, but still that same style. The boxes have to be stored somewhere and where better than the under her bed when the wardrobe is already full to bursting with boxes, loose shoes and boots. Anymore boxes under the bed and Katie will have to get a cabin bed or a bigger bedroom. Oh and she knows every pair of boots and shoes so don’t think you can sneak a pair. You could try asking. Let me know how that works out.

Receipt/Bills
All those boots and shoes come at a cost. Receipts and credit card bills aren’t pretty and spoil the whole shopping experience. Gathering dust, under the bed is the best place for such nasties which can be dealt with at a later date.

Notebooks and pens
Katie loves lists. She has lists for everything in pretty little notebooks written with pink fluffy pens. Her notebooks are her passion. She can’t resist walking past a shop without buying one or two. The problem is writing on the first page,  not wanting to spoiling the pristine, crisp pages.  But once written in, it doesn’t take Katie long to fill those pages with her crazy lists.

Gossip magazines
Katie loves a good gossip with her best friend, Alana. She also loves reading about gossip in the celebrity magazines.  Her favourite magazine is heat! The magazine is well thumbed but if you do find it under the bed, it will be left open on Torso of the Week unless there’s a story on David Beckham or Chris Hemsworth. Used as a fashion bible, you’ll find circles in biro around accessories (handbags and boots mainly) of celebrities.


Mornings
Not a morning person? Neither is Katie. That alarm goes off and she buries herself under the covers, denying the sun peering through the gaps in the curtains, hiding the morning as she snatches another five or so minutes. Add to this a Monday morning and you have the worst morning in the history of the world. In fact, Katie goes as far to muse that if she was Queen, Monday mornings would be banned. This would make Tuesday the new Monday and would therefore have to be banned. 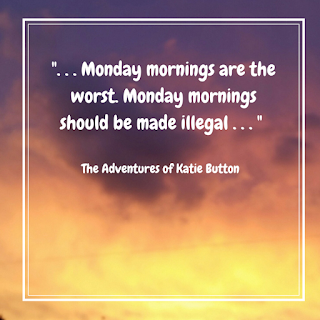 Sleep
There are times when sleep eludes Katie, especially after one of her dreams. Usually, Katie is like the dormouse in the teapot, finding sleep easy to come by. Even after the eight hours, Katie wants and needs more as it never seems enough. But those dreams are exhausting and depriving her of one of her favourite things. This makes Katie grouchy and in the need of coffee. Lattes are her favourite but she’s not adverse to the odd espresso to kick start her day especially after a night of broken sleep where her mood needs a shot of the black stuff.


Sex (or the lack of)
As a healthy thirty something, single woman about town, Katie enjoys the exercise of the horizontal kind. But it’s been a bit thin on the ground since she broke up with her boyfriend a few months back. It doesn’t help matters when her flat mate, Laura, invites her boyfriend to stay over. It also doesn’t help having paper-thin walls.


Loneliness
When the curtains are closed, the bedroom door is shut and the silence of the night is your only companion, loneliness is pretty hard to fend off. Katie has friends. She loves her job. But there’s no one to share any of this with at the end of the day.  It’s not obvious to anyone, even Katie. But there are moments when she misses the closeness of idle chit chat and  pillow talk, the touch of another’s hand and the warmth of the other side of the bed.

Hope you’ve enjoyed this little peek into Katie’s life. If you’ve read the book, what else do you think Katie is hiding in her bedroom?

Blurb to The Adventures of Katie Button
What happens when your dreams collide with reality?
Katie Button doesn’t believe in soul mates. When charismatic Jack Masterson asks her out on a date, despite him being her new boss alongside his more aloof brother, James, she agrees.

But her romantic dreams about a dashing highwayman, heroic gladiator and Tudor lord are becoming more frequent. And, worryingly, they feel real. She remembers every detail, every touch, every kiss. Until she realises the man in her dreams is James.


But Katie doesn’t even like James. And what about Jack, who is whisking her away for sexy mini breaks in the here and now?


Katie knows she needs to put an end to her dreams before they ruin her life. But how?