Our gorgeous sunny holiday is over!!! 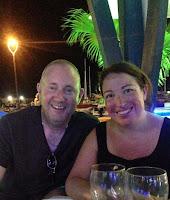 I’m so sad to be home as it doesn’t take long for the holiday to seem a lifetime ago (when we only got back yesterday) and normality to set in- washing (loads of it), shopping (Old Mother Hubbard has nothing on my cupboards, fridge and freezer), paying bills (grrr) and being absolutely freezing cold despite the sun shining.

But the saddest thing of all is that now we’re home, we’re back to doing our own thing. The teenager has gone to the gym and meeting up with friends. The Hubby is on his XBox and I’m tippy tappy on the laptop (whilst waiting for the washing machine to do it’s thing).

On holiday there was no wi-fi which meant no continuous status updates or chats with friends or sharing photos. (Well I shared the odd one which no doubt will cost a small fortune but I’ll worry about that when the bill comes in). It also meant I missed the week my book was on sale so there was minimal publicity for that (I may have posted a few tweets . . . again, I’ll see what the bill says . . . eeekkk).

What were we to do??? I thought I would go into meltdown. The teenager’s life had officially ended.

And boy, did we talk. Even the teenager couldn’t stop (the odd beer loosening his tongue). OK, so I now know about the superhero movies and the order to watch them, how they link to the comics etc. I know some stories from a life when my Hubby wasn’t my Hubby (didn’t his life start when he met me?). I probably know some other stuff too as we talked about random things, rambling on, late into the night, sitting on the balcony, watching the twinkling lights of the fishing boats come and go as we drank Sangria.

But it’s over and it may be the last holiday we have as a family as the teenager will be 18 next year, and already talking about holidays with his mates.

So, I’ll just gaze through the photos of our tanned, smiling faces and remember that actually no wi-fi wasn’t the end of the world for any of us.