Finally! After months of waiting, I was now standing in Wembley Stadium waiting for the gig of a lifetime . . . . . Robbie!!!! I had already seen him last year at the O2 but I was told that Wembley would be bigger, better, louder and just awesome. Of course with Olly Murs supporting, it was a double dose of boy power, pure pop and dazzling entertainment. 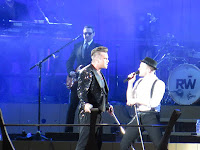 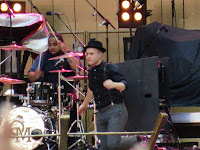 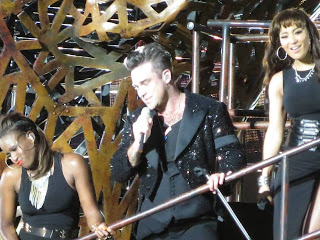 Olly’s set was just over half an hour where he mentioned Robbie Williams a gazillion times. Yes, we get it Olly. He is your idol and you’re now lucky enough to be on tour with the main man. The cheeky chappy did not disappoint with all his hits and some new ones. But the crowd went into a real frenzy every time he mentioned RW.  The crowd was 86,000 strong; a sell out and I’m sure Olly was lapping up every second and dreaming of headlining such a huge crowd one day. He loved it! And we loved him! 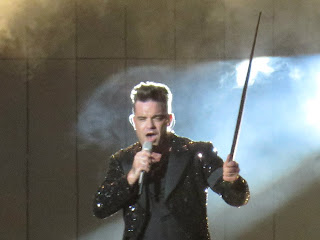 The noise was deafening. And when RW was first spotted, the crowd went into melt down. I had never heard anything like it. But then he zip wired down! The noise was impossibly loud, consuming every part of me as Robbie introduced himself as he always does “Robbie f*****g Williams!” at the top of his voice and then into Let Me Entertain You. Ever the show off, the entertainer, the sex symbol!

Now let’s be honest. All Robbie has to do is turn up; showing bucketfuls of attitude, showing oodles of love for his fans and showing us that he is The One as he struts his stuff.  He doesn’t even have to sing really.  We did that for him on his anthems. When 86,000 are all singing together, it’s spine tingling. In fact, he asked us to sing him home. So while he buggered off either to a chauffeur driven car or private helicopter, we were all singing Angels at the top of our voices, everyone in time, showing just how much we love Robbie and his songs! It was absolutely electric. After two hours of Robbie with singing, shouting, screaming and crying (yes I eventually shed a tear during Angels when others around me had blubbed right from the beginning including Little Sis) it was time to leave with sore throats, goose bumps and a T- shirt!

The start of many now!

I didn’t want it to end!

I didn’t feel ready for it to end. 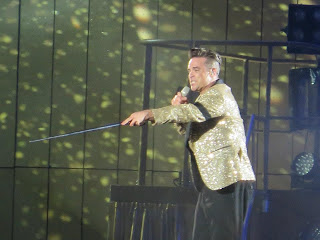 I could have sung and danced all night! I didn’t want to go home to a sleeping house when I had so much to share!!!

The hour long walk from the Stadium to Wembley Park Tube (usually ten minutes) was brilliant. Everyone spontaneously burst into Rock DJ and Angels as we waited to be allowed into the station. It’s always like this so was to be expected and it is part of the night, making an hour's walk seem half the time and making it such fun! 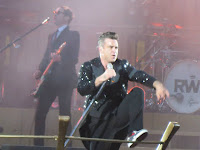 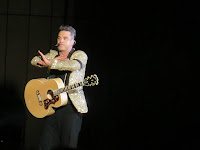