ThursThreads Wk212 Why Are You Still Here? 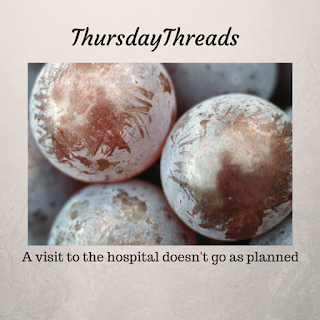 I sat by my husband’s bedside, squeezing his limp hand until my fingers whitened. A spasm of pain etched across his pale face. Behind his closed eyes, something was there, still fighting, still wanting to be. I sighed then helped myself to the grapes by his bedside.

I leant in close and whispered into his ear. “What will it take? Why are you still here?” It wasn’t the first time I‘d try to kill my husband but I hoped it was the last as I laced his favourite soup. I was running out of creative ways to make it look like an accident. And now the doctor had said he would survive, suggesting a bad bout of food poisoning of the innocent kind.

He opened his eyes and they fell on me; cold, unblinking ice blue eyes. His thin lips curled into a smirk. “I’m thinking the same thing.” His hoarse voice made his words sound sinister.

I frowned, not understanding his ramblings, feeling a bit queasy from demolishing the entire bunch of grapes.

A hot flush pricked my skin. He cast his eye to the bare grape stalks.

“You should have done it right, my dear. I did.”

“Wh-at? H-how?” But I would never know as I slumped over him, his hand stroking my hair as I breathed my last.


Thursday Threads over at The Wierd, the Wild and the Wicked hosted by Siobhan Muir