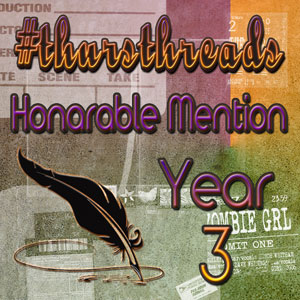 Yay!!! My Thursday Threads won a 'Honorable Mention'.
Judge, Angela K Roe says: I love the story. her fear comes through along with her acceptance and the ending was another surprise that was as much of a jolt as her java!!


It’s the tastiest cup of coffee ever. The strong, black liquid delivers a punch  to the gut, waves of adrenalin soaring through my veins. For the first time I see things clearly. I don’t know why today of all days, I see things as they truly are.

Maybe because today is the day I’m going to die.

It isn’t news to me, or the others. I see they’re already dressed in their long, white smocks, sitting in the flower garden. They’re waiting for me. I’m the star, the one he has chosen to be at his side for eternity. I’m not gonna lie, I kinda fell for it, fell for him, the way he spoke, his passion, his love and generosity to us all. I saw it as a privilege that it was me he was gonna  kill first. Me that would lead the others on their way to eternal bliss.

I choke on the coffee as it sharpens my senses, wakes me up from my dream like state where his words are to be praised, to be chanted, to be cherished.

Footsteps approach behind me. It’s him. He smiles, offering me his hand. I shake my head, backing away. I see the gleaming dagger.

“My dear, this dagger isn’t meant for you. I like death to be peaceful which is why I laced your coffee.”
248