I wrote this for http://picspiration.blogspot . xx 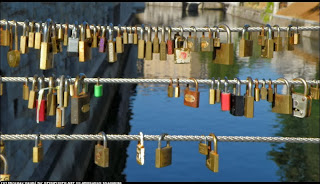 Erin stood alone on the bridge; usually a tourist attraction but at this early hour of the morning, it was deserted. She’d heard tales about the bridge and the odd decoration that hung from the thick cables and how people added their own padlock and made a wish. She took a few moments to wonder how successful those wishes had been, whether they came true, whether a happy ever after followed. But that depended on the wish. Maybe some wishes were dark, greedy, self obsessed, causing someone nothing but pain and not knowing why.

She wasn’t here to make any wishes, good or bad. Her job was harder, almost impossible as she stared at the length of cables which had a padlock hanging from every inch. How was she to choose?

Another walk back and forth, staring hard at each padlock wasn’t helping. Sitting on the bridge, her feet dangling, didn’t help.  Frustration was too simple a word for the predicament facing Erin. But time was running out. Above the buildings, the sky began to turn to beautiful colours of dawn; wisps of deep pink, oranges and reds spread across a once darkened sky but Erin didn’t notice the beauty.

How quickly time slipped by yet Erin wasn’t ready to make the decision; her heart wasn’t in it. Such a difference it made to everything. Without her heart, she was a shell. How could a shell make such a decision without feeling?

She heard the ticking of a clock, louder and louder, confusing her. Maybe she should just walk away and live her life without her heart; after all it had caused her nothing by grief. It had been broken twice; the second time most recently when Guy had broke off their engagement as he wasn’t ready, only to be ready enough with his work colleague.  That’s when she wanted rid of her pain, the heartache and pleaded with someone, anyone to help her.

Staring at the padlocks, Erin regretted every single word. What was life without a heart? Choose correctly, she’d get it back in an instant, choose incorrectly and it was gone forever, leaving her empty, uncaring, unloved and unable to love.

The purple padlock caught her eye. It had to be the one; purple was her favourite colour. She slowly reached out, her fingers just a tip away from touching when she hesitated. Her eyes strayed to the tiny, green padlock below. There was something familiar about it but she’d never seen it before. She hadn't noticed much since her heart had been taken. But the green padlock drew her in and her hand reached out and without hesitation her finger tips gently touched the cold metal.

Erin didn’t know what to expect but she hoped she’d feel different, feel emotion for everything around her. But she was indifferent. The sky was a dull blue. The river was murky. She squeezed the padlock until it dug into her skin hoping to feel some sensation of her heart back in my body. It was unacceptable to have chosen the wrong one. But obviously she had.

It was a long, despondent walk off the bridge to the bus stop where Erin waited alone. Finally, the bus came into view, trundling along an empty road. It stopped and the doors flung open. Erin stepped on, handing over change in exchange for a ticket.

“You get done what you needed to do at the bridge?” the bus driver asked.  Erin gave him an absent minded glance, nodded and took the ticket. “You don’t recognise me do you? I brought you here.”

“Oh, sorry, thank you.” She smiled but it was a half smile which was her life now; everything by half because she was not whole. The bus driver smiled back and Erin felt a jolt inside her, she felt a thudding against her chest like something wanted to escape but only as far as him. Erin took more notice as she stared at him. He stared back with his soft green eyes, smiling back.“Oh my God!” Erin couldn’t help but exclaim, resting her hand on her chest and felt the rhythmic beat. She looked around her and for the first time noticed how beautiful the town was with its quaint buildings, flower pots in bloom and the sun glinting on the river. Erin looked to the bus driver again and her heart lurched. The green padlock! The green eyes! Green!

“You made the right choice then?” he said grinning, “I knew you would when I dropped you off. The name’s Pete.” He held out his hand and Erin took it and knew she was never letting go.
Posted by Unknown at Saturday, November 30, 2013